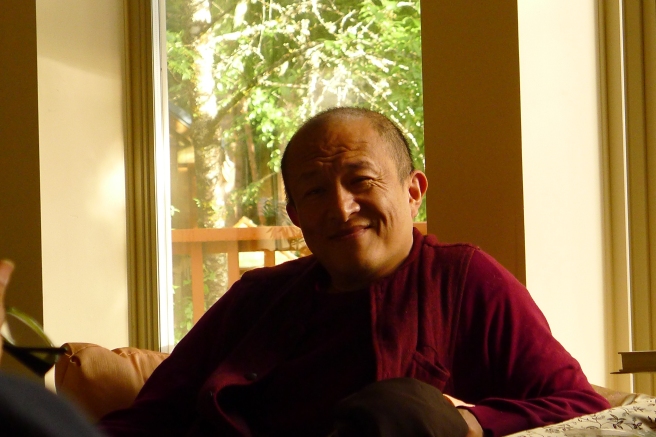 Writing has never come easily. It’s why I set up this blog. I was convinced that simply by providing myself with an unthreatening forum, elegantly turned phrases would spill effortlessly from my fingertips, and I would be able to amuse my friends from the comfort of my own solitude with stories of my disreputable youth. It hasn’t worked. So it looks like a change in modus operandi is called for. I think the problem may be that my mind is too full of Rinpoche.

Did I tell you about the very first time we met? It was at the old Rigpa centre in St Paul’s Crescent, Camden Town. Dilgo Khyentse Rinpoche was passing through, and it was my turn to serve him a cup of tea. A simple task. Or so one would have thought. In the end it look nearly half an hour. Getting into the two foot square kitchen was hard enough, but then to negotiate the backs and fronts of god knows how many over-excited Dharma groupies of all nationalities (I mostly remember the French) was virtually impossible. Why so many overwrought women found it impossible to separate themselves from the sink, the rubbish bin and the fridge, I will never know. And they never, for one moment, stopped talking.

Somehow the tea got made and I carefully placed the expensive, lidded porcelain cup on the obligatory tray that I held at shoulder-height (a method of service that was de rigueur at that time, but I had no clue why) as I made my way up the narrow stairs (delicately perfumed with urine, I remember) and into the shrine room. Dilgo Khyentse Rinpoche was sitting at the other end of the room on what looked like a huge, bright orange and gold raised bed, mountainous, golden and topless. Sogyal Rinpoche cross legged at his feet. The trick would be to cross the twenty or so metres between the door and Dilgo Khyentse Rinpoche without tripping over one of the two hundreds beings that had crammed themselves into the room, or spilling any of the tea.

In those days I oozed an unbound confidence that, sadly, was based on deplorable ignorance. I strode forward, smiling, keen to meet the eyes of this Buddha in the flesh and to do a matchlessly perfect job of serving tea (little things…). It worked pretty well for the first half dozen steps. Until, that is, I entered the no-time zone. Literally.

Suddenly, the cool autumn light changed shape and all sound both bled away and embraced me. The splinter of mind left to me went completely blank. To this day, it is a mystery how exactly that cup left the tray and found its way onto Khyentse Rinpoche’s table. As is how I extricated myself from that state. But I did, because the next thing I remember is someone calling my name.

Having made a fairly successful stab at focussing on Sogyal Rinpoche, I followed his gaze to the person sitting next to him. A young Asian man in robes sat bolt upright and looked directly at me as though I was the most important person in the room and someone he had been absolutely dying to meet all his life: Dzongsar Khyentse Rinpoche. Smiling, beautiful, radiant. I gazed, open mouthed. We shook hands.

“Philip has been a very good friend to me,” he said.

Mercifully, I have no memory of what must have been my completely incoherent reply, but from that moment I was hooked, irrevocably hooked. Eager and more than willing to play masochist to his sadist, secretary to his CEO, straight man to his comic. Student to his teacher. However, the puzzle of why a certain kind of Dharma student is irresistibly drawn to small, tight spaces filled with others of their kind continues to allude me. But I can still make a pretty good cup of tea.