We cycled around Tempelhof airport again on Saturday. Sadly, the politicians have decided to ‘develop’ it next year, and although it will still be a park, they intend to organize it and lay out gardens and draw up regulations…. Money will be spent. But noone we’ve met who uses it can understand why anything at all should be done to it. It’s fabulous as it is. A huge open space with two long runways for skating and cycling and kite flying, and plenty of glass to gambol and play on. In the middle of a city it’s already luxurious. What more could you want?

On Saturday I tried to take a photo of the very small section by Neuköln that has become a temporary garden colony. Locals have dragged crates and poles and garden furniture to mark out small sections of turf that they’ve cultivated over the summer, some with flowers, others veggies. We could have too, if we’d wanted to, because technically we’re also ‘local’. But we’re too lazy. It’s not the most beautiful garden colony I’ve seen, but the people who have created it love it and appear to have a wonderful time there. And by and large it is respected by other Berliners even though it has no fences or gates to protect it.

The most appealing thing about the Flughafen as it is now is the atmosphere. There were loads of people wandering around on Saturday, but not one gang of wild kids, and if anyone was abusing drugs of any kind they were doing it quietly and gently. Everyone seemed to be having fun or relaxing in old-fashioned ways, and we all rubbed along very nicely.

We smiled at the serious kite flyers who almost decapitated us every few yards and they smiled back, relieved that our smiles were still on our shoulders and not rolling to the ground. We shared the bicycle lane with the skaters and let them win. We avoided the wind surfers because they were clearly beginners and still mastering their crafts, not because they looked malicious or threatening. We smiled a little smugly at the families with tiny, bawling children, and their parents did their best not to look defeated by exhaustion. For once we were part of a multifarious group, two amongst many with a common purpose: to relax and enjoy the sun. Not being a natural ‘group’ person, it was an unusually pleasant experience.

These are the  two photos I kept of the garden colony. I doubt they’ll be the last photos I post of the airport this summer. At least, I hope they’re not. 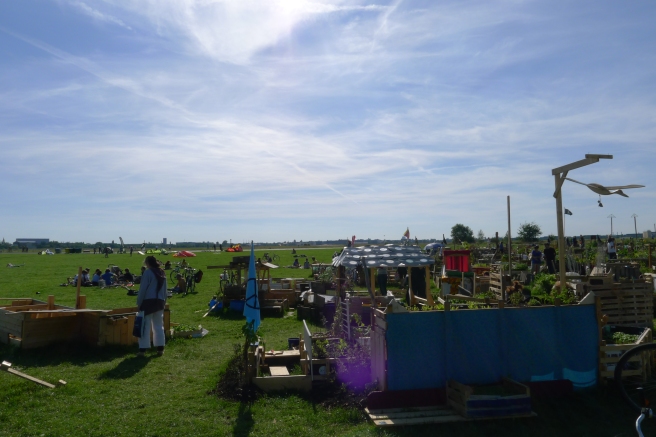