After the drupchen in 1998, it was decided that the light relief should be a football match between the Chökling monks (in the white shirts) who were knackered after ten days of practising 24 hours a day, and a motley crew of would-be football players claiming to represent Lerab Ling.

As you might imagine, Philip had quite a lot to do with the event, and turned up on the football pitch looking very trim in an all black kit and whistle. In his new incarnation of referee, Philip ran a very tight ship and much to the delight of the Rinpoches (was Khyentse Rinpoche there? I don’t remember) waved his red card around with great aplomb when anything approaching a skirmish broke out. The upshot was that the Chökling monks won—the quality of their game is still spoken of in hushed tones in buddhist footballing circles—and the Lerab Ling lads bowed graciously to the conquering heros. And noone suggested for one minute that Philip was biased, or anything…

I remember OT Rinpoche being quite scary back then. Sogyal Rinpoche pointed out, with a certain amount of glee, that his monks were all clearly terrified of him, and many stories circulated about vajras being thrown and the like. I realize now that he looked a lot his father, but far more menacing.

I first met OT Rinpoche in 1992. I’d heard about him before that, of course, and Khyentse Rinpoche kept various photos of him at his flat in Clanricarde Gardens, so his image was familiar to me. But I didn’t ever speak to him until 1996. That was the year Khyentse Rinpoche visited Lerab Ling when Khandro Tsering Chödron and Sogyal Rinpoche’s family were there. Nyoshul Khyen Rinpoche came too, plus a treasury of miscellaneous sublime beings. I was an attendant that year and would take Khyentse Rinpoche his breakfast, then sit with him as he ate it.

One morning, OT Rinpoche walked in. Doris also turned up, and maybe even Mai Lim. Anyway, as Khyentse Rinpoche buttered his toast, he asked OT Rinpoche what he’d taught the previous day. Rather than telling Khyentse Rinpoche the title of the subject, or quoting the highlights, OT Rinpoche repeated, word-for-word, the entire teaching, It took quite some time so I spaced out a bit, which may be why at this point my memory gets a bit hazy. As far as I remember, Doris then asked Khyentse Rinpoche a question about OT Rinpoche which, quite suddenly, OT answered himself, in English. It was a wonderful moment. We, his audience, were utterly confounded and amazed because we were certain he only spoke Tibetan, and the timing of his revelation was perfect.

So now it’s relatively easy to communicate with OT Rinpoche, if you keep your English simple and direct. His own take on the language is peculiar but effective. And as many of you already know, if you do try engaging him in conversation, he can be quite a tease. 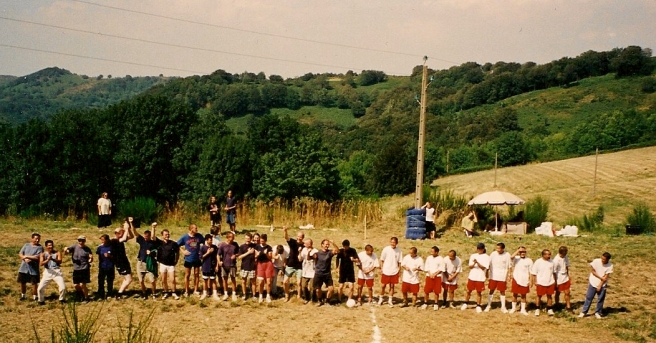