I’m constantly amazed by how little really useful information I’ve picked up over the years. For example, skylarks. Did you know that skylarks nest in the middle of grassy fields? I didn’t. It would never have occurred to me that such a tiny bird would even consider nesting anywhere but in a tree. They do though. As I found out yesterday on our first spring walk on Tempelhofer Feld (the old airport I wrote about last summer). Much of the middle of the airfield had been cordoned off with red and white plastic ribbons and notices (in German) pitched announcing skylark nesting season. And it seems to be working. Berliners don’t walk on that part of the field (I can’t speak for the poxy foreigners) and throughout our hour or two in the sun, we found ourselves being serenaded by skylark song.

True, the background noise of motorized traffic never really goes away in the middle of the city, but to be able to lie on a blanket, stare at the sky and clouds, and listen to the wind and skylarks was really quite special. (And I must admit, I begin to crave a little house in the country with a large garden. But it’ll never happen…)

The Tempelhof skylarks did have a little more competition than just the traffic yesterday. Andreas decided he wanted to learn the words of a new song as we basked (fully clothed—it wasn’t that warm) and so my left (rather deaf) ear enjoyed his gentle balladeering, while my right (rather less deaf) ear followed the skylark troubadours. Heavenly.

I videoed Andreas as he learnt one song, but all you can hear is the wind… so here’s a recording of a skylark instead. 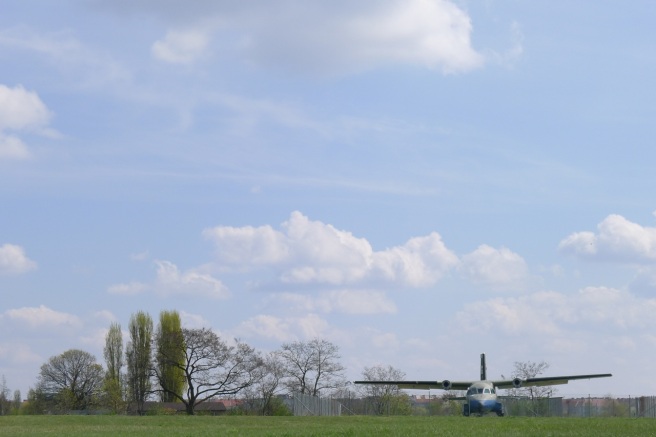