“Words, words, words!” Not the first time have I quoted Gloria Swanson’s Norma Desmond in Sunshine Boulevard, and it won’t be the last.

Bloody exhausting things, words. Especially when they won’t line up as they ought. I took a photo the other day of brightly coloured draw knobs that the Turk at the Mehringdamm end of Bergmannstrasse has been peddling for the past month. It hurts to look at this snap because they remind me of the jumble of vivid and brilliant words and phrases that pile up in this bleeding yet rusty mind of mine, for which I strain muscle and sinew to breaking point in the effort to screw into place, but always find that the end result is at best odd, or worse, painfully affected and downright awkward. Bugger it! 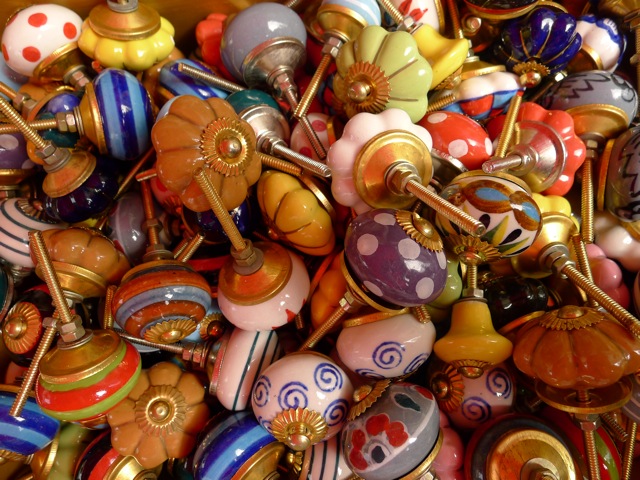 I think the root of the trouble may lie in sad fact that the wave of memories of music I’ve been drowning you under this week, indulgent reader, has also loosened and washed up faded but determined reminders of various poems I was exposed to as a child. I can’t say I ever learnt any of them properly, but scraps have been screwed up and lodge, painlessly, in the deeper recesses of my memory—all produced by the truly great and talented writers of the past. John Clare, for example, the farmer, rescued from obscurity in the 20th century and, we are told by them that know, is now loved as much as Keats and Shelley. (Does anyone truly read Keats and Shelley these days, except for exams?)

There’s an ode or a sonnet he wrote to some bird or other that schoolchildren of my generation in Buckinghamshire, where I grew up, were given to read—a generation earlier they would have commited it to memory, but all I can dig up  are the phrases ‘thick and spreading hawthorn bush’ and ‘sing hymns to sunrise’. A cursory google didn’t instantly splat the poem across my screen, so I’ve settled for posting perhaps his most famous poem, which I like better and which, given my current mood (be grateful I don’t elucidate), seems far more apt.

My friends forsake me like a memory lost:
I am the self-consumer of my woes;
They rise and vanish in oblivion’s host,
Like shadows in love’s frenzied stifled throes:
And yet I am, and live — like vapours toss’t

Into the nothingness of scorn and noise —
Into the living sea of waking dreams,
Where there is neither sense of life or joys,
But the vast shipwreck of my life’s esteems;
Even the dearest, that I love the best
Are strange — nay, rather, stranger than the rest.

I long for scenes where man hath never trod
A place where woman never smiled or wept
There to abide with my Creator, God,
And sleep as I in childhood sweetly slept,
Untroubling, and untroubled where I lie,
The grass below — above the vaulted sky.

2 thoughts on “Stranger than the rest…”